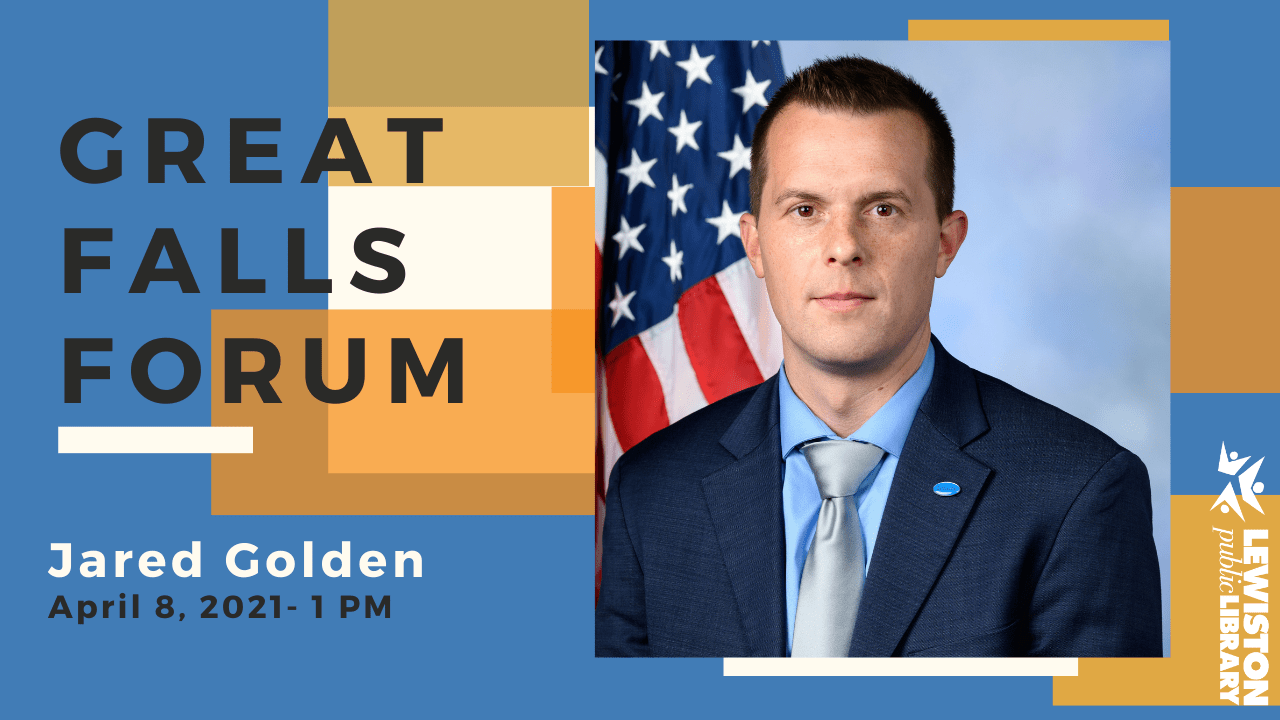 The 2020-2021 season of the Great Falls Forum continues on Thursday, April 8th, featuring a conversation between Congressman Jared Golden and Dr. Mark Brewer, Professor of Political Science at the University of Maine, on the topic “Polarization vs. Pragmatism: A Conversation about Maine’s Second Congressional District.” The program will take place from 1 – 2 PM virtually via Zoom and streamed to the Lewiston Public Library Facebook page.

While much of the country has sorted itself into Republican and Democratic communities and retreated deeper and deeper into polarized political corners, Maine’s Second District has defied this concerning trend. Mainers in this sprawling district have earned a reputation for independent-mindedness, looking beyond party labels, and bucking the conventional wisdom about the direction of American politics.

In this Great Falls Forum, Congressman Jared Golden and University of Maine Political Science Professor Mark Brewer will discuss the unique factors that have led to this distinct political culture. How did it come about? Can it survive? Congressman Golden and Professor Brewer will explore some of these questions, as well as answer questions from the audience.

Jared Golden represents the Second District of Maine in the United States Congress, where he serves on the Small Business Committee and the Armed Services Committee. He grew up in Leeds, a small town in Androscoggin County. After enlisting as an infantryman in the Marines, Golden deployed to Iraq and Afghanistan before returning home to Maine. Congressman Golden currently lives in Lewiston with his wife Isobel.

Mark Brewer’s research interests focus generally on political behavior, with specific research areas including partisanship and electoral behavior at the mass and elite levels, the linkages between public opinion and public policy, and the interactions that exist between religion and politics in the United States. Professor Brewer is the author of Party Images in the American Electorate and Relevant No More? The Catholic/Protestant Divide in American Electoral Politics, and coauthor of Diverging Parties, Split: Class and Cultural Divides in American Politics; Dynamics of American Political Parties; and Parties and Elections in America, now in its 6th edition.  He has published articles in Political Research Quarterly, Political Behavior, Legislative Studies Quarterly, and Journal for the Scientific Study of Religion.

The Great Falls Forum is a monthly, brown-bag speaker series featuring statewide and regional leaders in public policy, business, academia and the arts. Admission is free to all Forum events. The Forum is a co-sponsorship of the Sun Journal, Bates College, and LPL. Recordings of the virtual Great Falls Forum programs will be archived on the Library’s YouTube channel following the live event.

For more information, please contact the Lewiston Public Library at 513-3135 or LPLReference@lewistonmaine.gov.

The Bilingual Revolution: The Future of Education is in Two Languages with Fabrice Jaumont